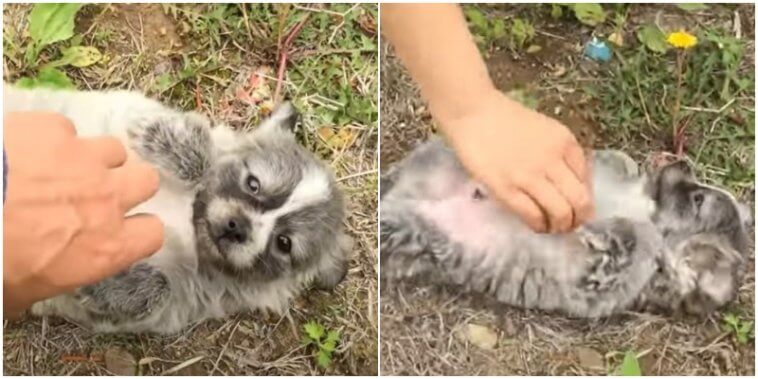 In a small village in China, a group of mischievous children frightened a puppy by firing fireworks towards him. The scared puppy ran into a nearby air raid tunnel to escape. Several days later, that story was told to a neighbor. He decided to call Northeast Asia Rescue for help. After receiving the call, the rescue team (Will and Fiona) rushed to the scene to save the dog.

The tunnel was located next to abandoned buildings where the children often played. It was dark and cold inside the tunnel, so spotting the puppy became more difficult. After a while, the rescue team finally found him curling at a corner of a hidden room. He was too scared to move or scream. To reassure the poor puppy, Fiona fondled him so that he could feel the warmth and love.

After the puppy had calmed down, he was taken out of the tunnel. When Will hugged the tiny puppy, his eyes brightened up the light of happiness. He was just long for love and care. The rescue team took him home and bathed him. The sweetheart was still scared, but he enjoyed the bath. He turned out to be a cute and obedient boy. Eventually, all the danger had gone, he could live in peace and safety.

Will and Fiona decided to call him Leo. When Leo became more sturdy, he could spend more time playing. The rescue team was happy to foster that little angel because Leo was such an enthusiastic and cheerful boy. They gave him the best care and love he deserved. We hope that Leo would find a loving forever home for himself.

Northeast Asia Rescue is working every day to rescue vulnerable animals and help them find new loving homes. If you find their work meaningful and you want to support them, please donate at this link. You can follow their Facebook to know more about their rescue stories.