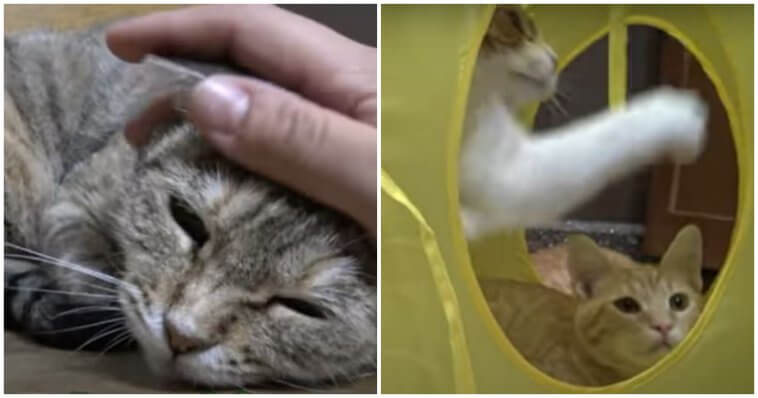 Hope For Paws is a rescue organization working to save stray animals (mostly cats and dogs) in Los Angeles, America. Every year, they rescue hundreds of animals and use their story to inspire the local community. One day, they received a call telling about a mom cat and three kittens living at a welding plant.

After the rescue team had arrived, they decided to catch the kittens first, because dealing with them was easier. The team used some food to lure the three kittens into a trap, but finally, only two of them got inside it. The other was scared and ran away. Therefore, their next mission was to find the mom cat and the last kitten. After a while, the rescuers saw them lying on a dirty shelf behind a tractor.

Using the same method, they managed to lure the two cats into a trap with some tuna. At first, the mom cat and her kitten were frightened when thinking that the rescuers would harm them. But the rescuers patiently waited for them to calm down. Their reassuring behaviors help the cats feel warmth and love. After that, the whole family was taken to the vet to receive medical care.

Tests showed that both the mom cat and her kittens had no disease. Three kittens were Iron Man, Super Man, and Aquaman. They were all playful boys. Their mother was the beautiful Mystique, she was living happily.  A few days later, they were taken to Room 8, a nursing house that fostered and helped stray cats find new homes. Very soon, Mystique and her babies could get used to the new home. The rescuers came to visit them after a month, and they were happy to see them in good health condition.

It’s important to understand that the life of a feral cat is usually very short (only 2-3 years). By getting them off the street, we increase their lifespan by more than 10 years! Not only their lives will be longer, but they will be happier and healthier because they will be loved and cared for. Share this post to inspire other people to save more street cats.