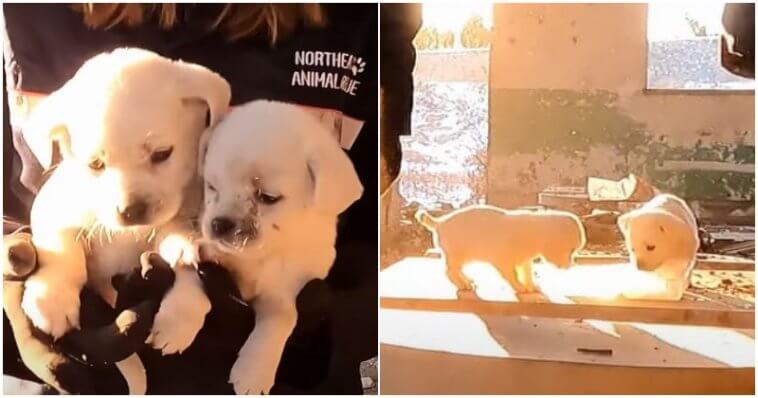 Northeast Animal Rescue is an animal organization working to save stray animals (mostly cats and dogs) in China. Every year, they rescue hundreds of animals and use their stories to inspire the local community. In a cold winter, Northeast Asia Rescue found a little puppy in an abandoned factory while they were driving on the road. The rescue team (Fiona and Will) believed that there were more puppies, so they stopped their car to rescue them.

Seeing the rescuers, the puppy ran away to escape. He was scared of humans. To catch the rest of the puppies, Fiona and Will needed to find him first. Therefore, they spent the whole day searching around the factory, but they couldn’t figure out where the puppies were hiding. The environment there was too dangerous for the puppy to survive. Because the puppies might appear at any time, they decided to stay at the gate till dawn.

The next morning, the rescuers looked for the puppies for a second time. While walking inside the factory, they noticed the dog’s footprints on the snow. The footprints led them to an abandoned place in which the puppies were staying. Finally, they found two little babies searching for food. They were a pair of lovely siblings attached to each other. As the puppies looked starving, Will gave them some food and drink so that they could fill their empty stomach. After making sure that there was no one left, the team took them to their car.

The baby girl was named Dawn and the little boy was Sunny. After all, they no longer had to live in that dirty abandoned house or endure the freezing weather. They were already rescued to a safer and more comfortable place. Under the love and care of the team, two little angels will certainly grow up strong and healthy.

These little puppies are the sweetest and cutiest creatures. They are still looking for forever homes. If you want to adopt them, please contact Southeast Animal Rescue via Facebook or Twitter. And if you think their work meaniful, just support them at this link.