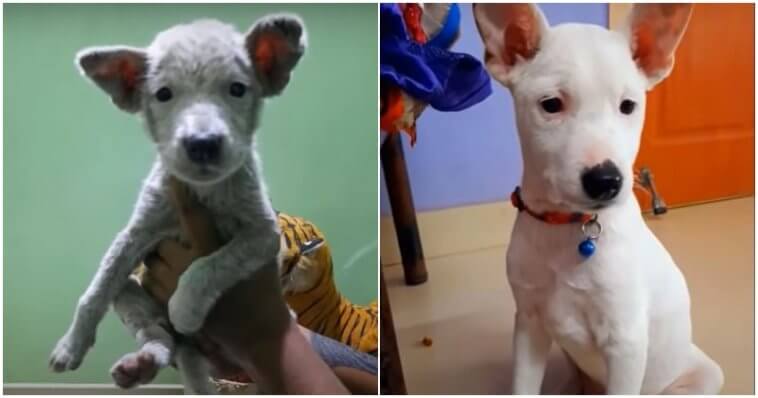 Dogs are true friends of humans, but many of them are not being treated like friends. Harry is just a little puppy whose life is full of sadness and tears. He was beaten by his cruel owner and was thrown on the street. Luckily, a kind man named Mike Brown rescued him and brought a new beginning to his life.

After taking Harry home, the rescuer noticed that he had severe scabies (an infestation of the skin causing intense itching and a pimple-like skin rash). As the dog felt painful, Mike bathed him with some medicine. The shower relieved Harry’s itching, and he fell asleep very quickly. The man couldn’t imagine how much pain and misfortune he had been suffering, but he hoped that the poor little soul would get through it soon.

The next day, Harry was taken to the vet for treatment. Tests showed that he got serious scabies which took a month to be treated. During that time, the little dog had to stay at the vet until he fully recovered. Also, the doctors put him in quarantine due to his infectious disease. His therapy included lotion covering and injection to relieve the itching.

On day four, Mike could see a slight improvement in Harry’s condition. He was happy to see the puppy in a higher spirit and physical health. He ate well. Ten days later, Harry was still in his treatment process, but the situation was much better. He grew up quickly. Shortly after, the cage became narrower for Harry. On day 20, he was strong enough to leave the vet.

One month since the rescue, Harry’s life was totally different. He no longer felt itchy or painful. At that time, he could enjoy cheerful days with his warm-hearted rescuer. Mike especially loved him, and he thought that there was an unbreakable bond between him and the little puppy. We can be happy that Harry was in safety and happiness. Now, when he wakes up, he knows that he is loved and cared for.