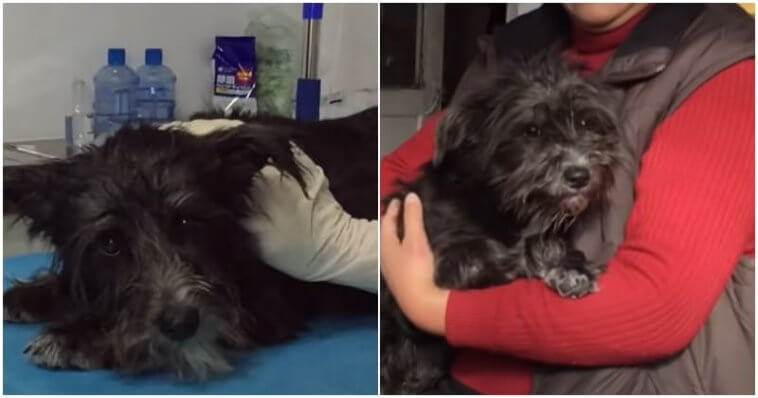 Archon was a homeless dog. On a snowy day, Northeast Animal Rescue received a call telling that he was wandering in an urban river. Immediately, the rescue team including Will and Fiona came to the site and rescued the poor dog.

It took a while for the rescuers to spot Archon as the heavy snow restricted their visions.  When the team approached the puppy, his first reaction was to run away. They had run towards him, and soon they noticed that he was not afraid of humans at all. Will gradually built up a connection with the little boy by giving him some food. As a response, Archon received it in hesitation but not panic. The rescuer waited for him to feel more comfortable, before catching him with a leash. The trembling puppy showed instinctual resistance but quickly calmed down.

After a lot of uneasiness, the team finally managed to catch the poor puppy and took him to the vet. Tests showed several health problems in Archon. His gums were a little ulcerated. As the little boy was dehydrated, he received an infusion at the clinic. That time was the onset of the brucellosis pandemic in China, so Archon was also checked for it. Luckily, the result was negative. The team could take him home but needed to bring him back to the vet every day for his treatment.

At home, Fiona bathed him and put him in a comfortable place. She fostered the little pup until he got adopted by a nice family. Day by day, a special bond between Fiona and the little puppy gradually built up. The boy was happy and peaceful to stay with his foster mother. Within several weeks, he fully recovered. Fiona took him out for a walk on a sunny winter day. At that time, Archon rebuilt enough confidence and enjoyed his happy life. Shortly after, a great family adopted him. We can be happy that Archon is being loved and cared for!

Northeast Animal Rescue is working every day to help many other homeless / abandoned animals. If you find their work meaningful, you can support them via Paypal. Don’t forget to share this post and inspire other people to do save animals.