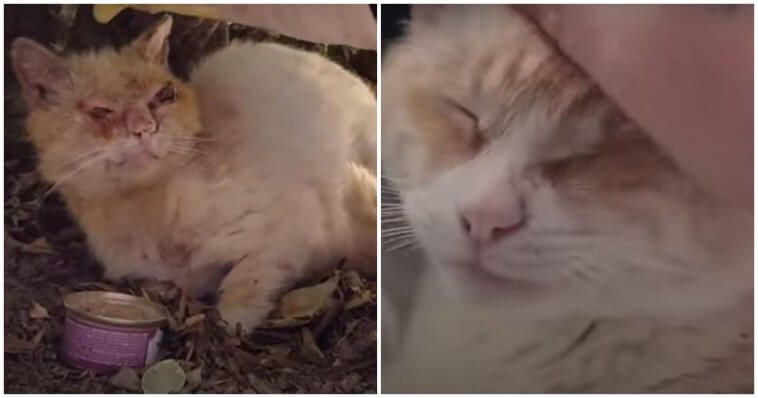 It has never been easy to deal with feral animals because they don’t have any contact with humans at all. This feral cat is the same. When he was found, he was frightened, quiet, and didn’t trust people. Socializing him was such a long and hard process with a lot of patience, but finally, the feral cat turned into the sweetest and most adorable creature.

That creature was Pollie. He was found hiding under dense vegetation. The poor cat had severe eye infections, which was the reason why he couldn’t see clearly. But his sense was elevated. Pollie put no trust in the rescuers at all. He tried to run away every time they approached him. It took a while for the rescuers to catch the feral cat, and take him out of the tree bush.

After that, Pollie was kept in a cage and was taken to the vet. The physical examination showed that he was healthy. The rescuers thought that he was blind, but actually, he got a beautiful crystal eye under his shaggy hair. After Pollie had been bathed, he looked much better in white-yellow soft hair.  However, the poor cat still didn’t want to lay trust in humans.

As his condition got better, Pollie became more antisocial. From the first day, it was not easy to domesticate the feral cat, but the rescuers kept waiting to see his change with all their patience and tolerance. During the first days, He had a difficult time locating the litter box, so the carers needed to give him a bath every day. But thanks to that time, they gradually earned the trust of Pollie.

Five months later, an amazing transformation came to the poor creature. He grew up so big and strong. The boy became much more friendly and his right eye fully recovered. He lost one of his eyes, but the other was perfectly beautiful . Also, he overcame his fear to make friends with other furry friends living in the house. Pollie was certainly enjoying his life with the love and care from the rescuers.