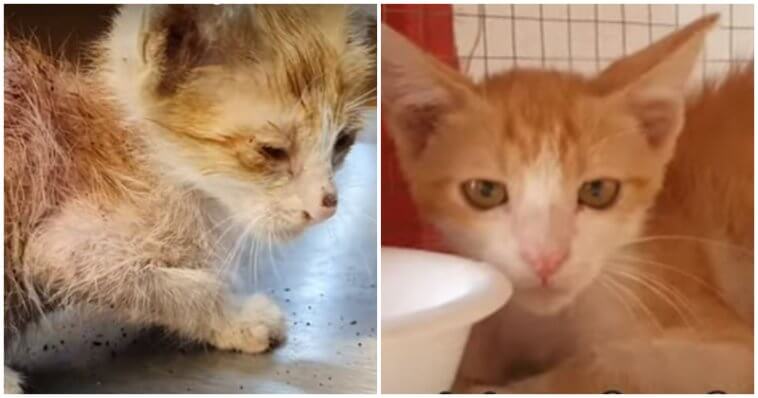 This healthy and handsome boy is Lucky. He is living with a foster father who loves and takes good care of him. But do you know that he used to be a homeless cat covered in dirt and a lot of fleas? Living as a stray cat since his birth, Lucky never thought that someone would appear in his life and change it. But one day, a kind man rescued him and made him the happiest kitten ever.

Seeing the little kitten in sickness and hungry, the man took him home to take care of him. But Lucky was not friendly at all, he was frightened and tried to run away whenever the man wanted to calm him down. Perhaps he had got bad experience with human hands. As he looked dirty and sick, the man decided to take him to the vet.

Lucky was covered with a lot of fleas, so it was important for him to be cleaned up, otherwise, he would feel very itchy. Too many fleas might open wounds on the skin, causing serious infections.  The doctor gave him some medicine to control the activities of the fleas. Besides, he was also injected. Lucky’s rescuer decided to keep him in a separate cage until he came over the sickness.

After several days, the man decided to take her out for a sunbath, as the sunlight was good for his growth.  Receiving good care from the man, Lucky’s condition was gradually stabilized. The little cat started to realize that there were still kind hearts on earth and decided to trust the man. One month later, Lucky fully recovered, he looked bigger and stronger. His amazing transformation couldn’t be explained by good treatment only but also from the love and care of the man. Now, he is living happily with his foster father, still waiting for a loving forever home.

Share this post to help him find his own family! If you want to adopt this beautiful and sweet creature, contact the man via email at animalscottage@gmail.com. He also got a youtube channel Animal’s Cottage where you can see thousands of heart-breaking videos about animal rescues.