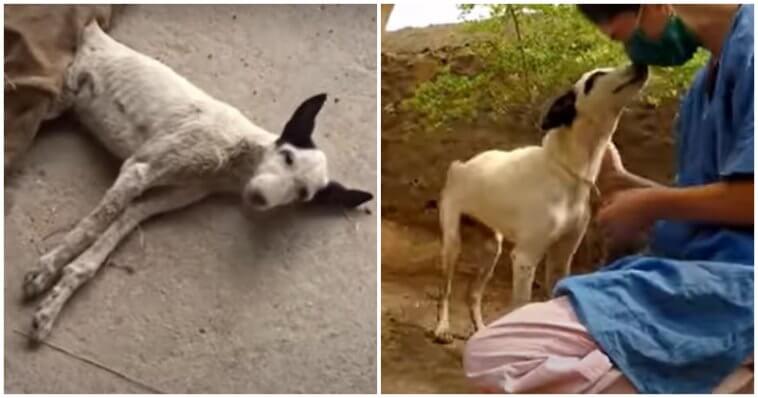 Sparkle used to be a collapsed and anorexic street puppy. The canine distemper virus stopped him from eating and made him suddenly unable to stand. Thanks to the love and care from Animal Aid Rescue, now he can stand and walk like other dogs. Also, Sparkles was a determined boy who never gave up fighting against fate. His story showed us that nothing is impossible as long as we work hard.

Back when Sparkle was found, he looked sick and emaciated. Despite the illness, he still wagged his tail when seeing the rescuers. Immediately, he was taken to the vet to receive medical care. Based on symptoms like nasal discharge, diarrhea, loss of appetite, the doctors concluded that he had canine distemper (a fatal virus for which there is no direct treatment). As it could develop secondary pneumonia, they gave him preventive antibiotics. The medical team also checked for any fractures, but he didn’t have any. At that time, Sparkle was very weak and unable to stand.

On day 5, the situation improved slightly. Sparkle could enjoy little food and drink. Under the love and care from the rescuers, he felt happy. Two days later, the little puppy received gentle physiotherapy. However, standing on his own was still impossible for him. The strong-willed creature didn’t give up. He kept practicing every day and made up a gradual change.

Fifteen days later, Sparkle’s legs could bear more weight, but his wobbly steps showed that he was still unable to walk alone. That didn’t upset the little boy but encouraged him to try harder. Thanks to daily practice, Sparkle finally could take the first steps without support. Now, Sparkle can move and run quickly. He grew up healthily under the love of the doctors and rescuers. His recovery couldn’t be explained by good treatment only but also by his strong spirit.