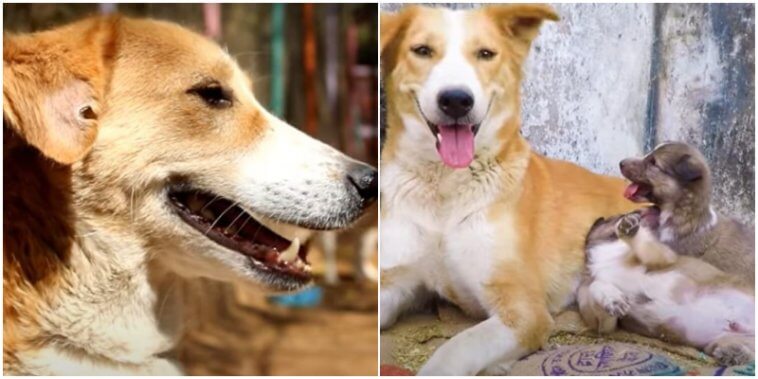 Giving birth is a long and painful process that any mother has to overcome. This process often comes with risks for both mothers and babies. During her childbirth, this mom dog (Apricot) had a baby stuck in her birth canal. Luckily, she was rescued in time for an emergent C-section.  Also, the operation saved six babies that remained inside their mother’s uterus. They are now living happily with their mom and dad.

When Apricot was found, she looked depressed and exhausted. It was unknown how long the little expired body was stuck in her birth canal. The rescuers at Animal Aid Unlimited pulled the little body out and took the mom dog to their hospital. After checking her body, the medical team realized that there were more babies inside Apricot’s uterus. But her contraction had stopped, so, they had to perform an urgent C-section to deliver the puppies.

As the surgery was successful, six adorable souls were saved. The newborn puppies ate very well, and Apricot soon became a busy nursing mother. Three of the babies were healthy, while three others were sick and gone after a serious illness. Losing three kids, Apricot felt very sad, but the love and care from the doctors helped her survive in that crisis.

When the puppies became older, Apricot was spayed. Then, the rescuers took them back to their home as the father dog had been waiting for them to return. Apricot and her puppies felt really excited to reunite with the father. One week later, the rescue team visited to check the baby dogs and their mother. And they are very happy to see them in a good health condition.